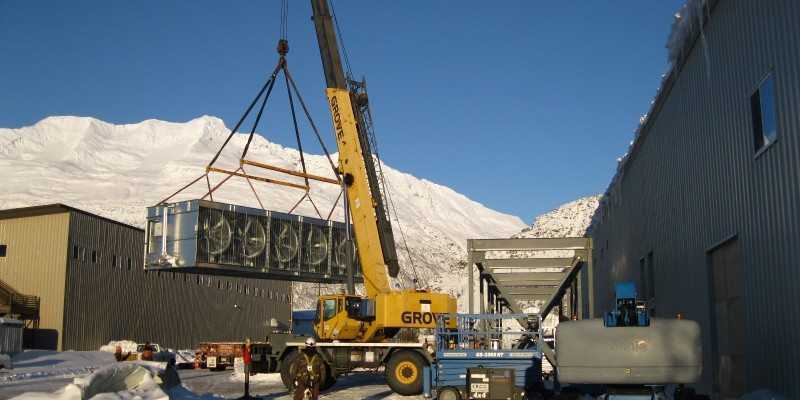 Silver Bay Seafoods LLC is a processor of fish products based in Sitka, Alaska. Born out of the vision of a group of fishermen, Silver Bay’s integrated approach to catching and processing fish for domestic and international markets has seen tremendous growth. In less than ten years of operation, the company has grown from a single processing facility to one of the largest seafood companies in Alaska, operating five processing facilities throughout the state, with plans to begin processing squid in California in the near future.

Working closely with Silver Bay, Fisher Construction Group of Burlington Washington is nearing completion of a 64,679 sf. processing plant with admin office in Valdez, Alaska. Breaking ground in April of 2015, the construction crews worked 12-hour shifts through the summer to close-in the building before the first snow arrived in November. Once closed-in, crews worked through the winter installing the fire, refrigeration, mechanical systems, along with the equipment, so the facility is ready to begin processing pink salmon in June.

The Valdez processing facility will operate during summer fishing season, primarily processing pink salmon which will then be sent companies for end-use processing. Beyond the meat itself, this Silver Bay facility will process salmon roe for wild salmon caviar, and recover fish oil from the remaining solids.

Designed to Meet Silver Bay’s Specific Needs
To process fish as quickly as possible, the new Valdez facility features a robust refrigeration system when measured against typical food processing standards. Because the city of Valdez was not able to allocate enough power to meet Silver Bay’s needs, ten generators will support the plant, delivering 7 Megawatts of power to run the processing operations until the power grid is expanded. The two freeze tunnels and a plate freezer can freeze up to 130,000 round pounds of salmon per hour.

A refrigerated salt water system (RSW) circulates chilled water to the tanks, lowering the temperature of the fish for processing as quickly as possible, maximizing the quality of the product.

Built Clean
The highly automated facility meets food safety standards and is designed to hold up to the tough rigor of daily cleaning. A mezzanine was built to process and freeze the salmon caviar. The mezzanine clean room has a sloped epoxy floor and boxed girders to minimize the possibility of cross-contamination and harborage of micro-organisms.

It is Called ‘The Last Frontier’ for a Reason
Building in Alaska takes tremendous planning and forethought. Before breaking ground on the processing plant, Fisher built a three-story bunk house to house the construction workers, and later plant employees, in the small community on Prince William Sound whose population is about 4,000 people.

The processing plant and bunkhouse are built to withstand a winter snow-pack of up to 27 feet. From the structural steel down to every tool and its replacement, all of the construction materials were carefully planned by the construction crew and packed in containers to make the 1,500 mile trip by barge from Seattle.

The building’s structural design dealt with the particular challenge of locating in an area very prone to earthquakes. The Great Alaska Quake of 1964 caused severe damage and loss of life throughout the region. Valdez itself was relocated after the quake. Seismic engineering and construction have made tremendous advancements in years since. For this plant, Fisher’s team drove 252 steel piles in the substrate below the 10-inch structural slab and grade beams.

The processing plant is built with composite structural steel, a standing seam roof, and metal siding. The structure itself is designed to withstand the wind and snow loads that an Alaskan winter can dole out. For fire protection, a dry sprinkler system was installed, making it possible stand empty in the off season, and restart for seasonal production.

The fifth Silver Bay processing plant in Alaska, this plant will provide seasonal work for up to 350 people.